I reluctantly went to visit a friend of mine in Istanbul only two days after the unfortunate suicide bombing in the heavily populated touristy area known as Taksim. I was advised by almost everyone else that I knew that now was not a good time to go but I am a firm believe in the fact that bad things happen everywhere, most of which you could never predict. Sure some places are more dangerous than others but at the end of the day, if its your time to go its your time to go. With that being said, I try very hard not to let anyone or anything steal my happiness so I decided to spite the terrorists and visit Turkey anyway.

Arriving in my typical fashion, Beats headphones and Carrera shades, I landed in Istanbul airport and was picked up by my friend moments after walking out the door. We head to his house for a few afternoon cocktails and then took to the city to explore. Before even realizing where it was that he was taking me, we were getting off the metro at Taksim Station. In my defense, at the time I had no idea that that was the exact place the suicide bomber detonated two days prior. A few things you will notice from the following pictures. First, this is clearly an art form of which the Turks take great pride. Second, almost everything is made with some form of pistachio. 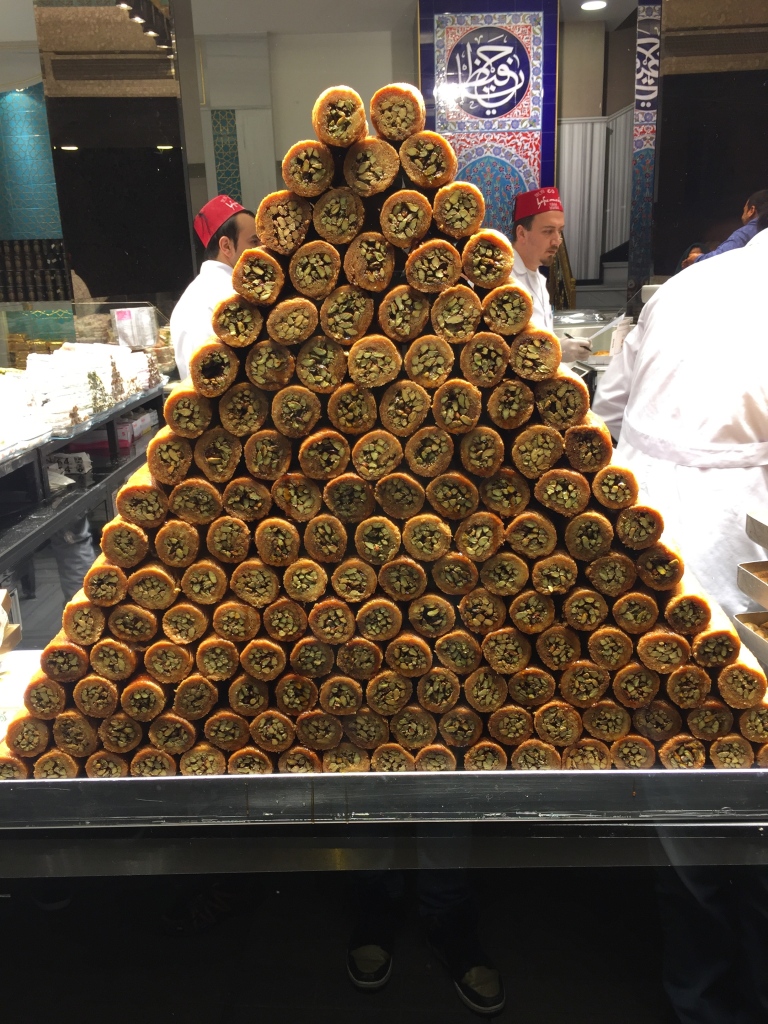 Probably the most perfect, well-balanced baklava I have ever had, and it was my first night! Disclaimer: I ordered a box of about 10 different types of sweets as pictured above and literally took a bite out of each one so I could taste everything. By about #8, they all took on the same characteristics. They all are flakey, nutty, and gushing a sweet syrup or honey when you bite into it. Very delicious, but I would advise only having one or two with a cup of tea. Anything more would be uncivilized.

I literally walked right by where the bomb went off. Had I been there two days sooner, it could have been me. That puts a chilling perspective on life. Value it and appreciate it everyday. Rest in peace to the deceased. 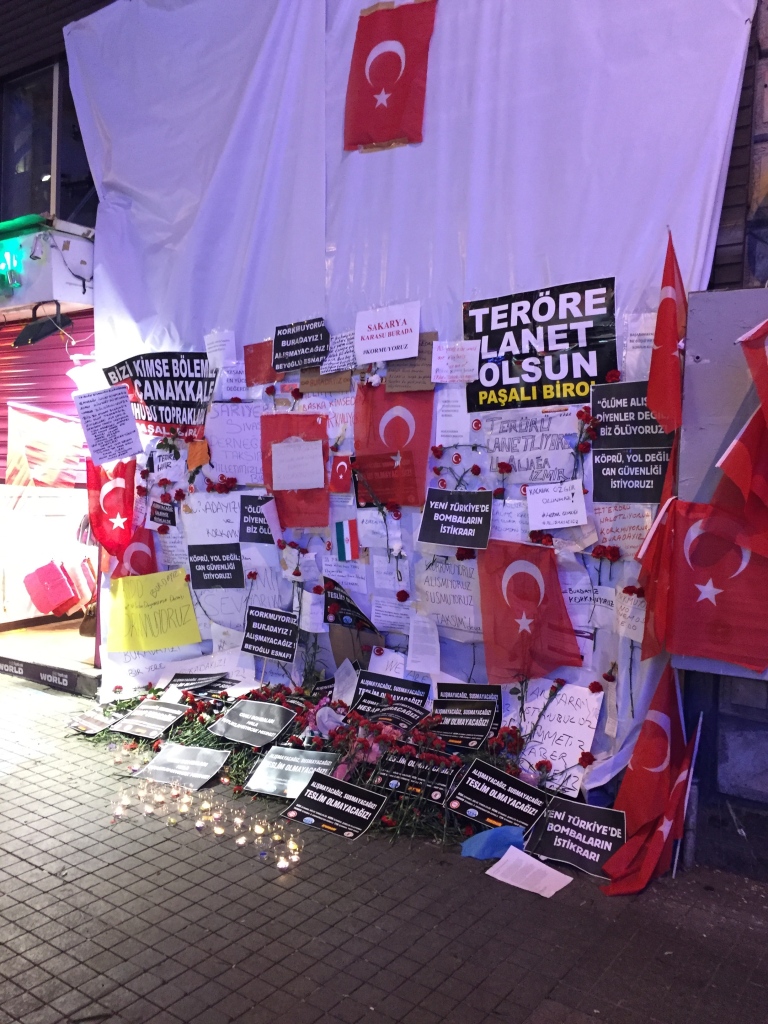 The next morning one of my friends decided to accompany me to breakfast at a nearby spot. I enjoyed a cup of tea along with a type of soft very creamy cheese covered with honey using bread to dip. As soon as I tasted it I immediately thought about “the land of milk and honey”. This, THIS was it!! 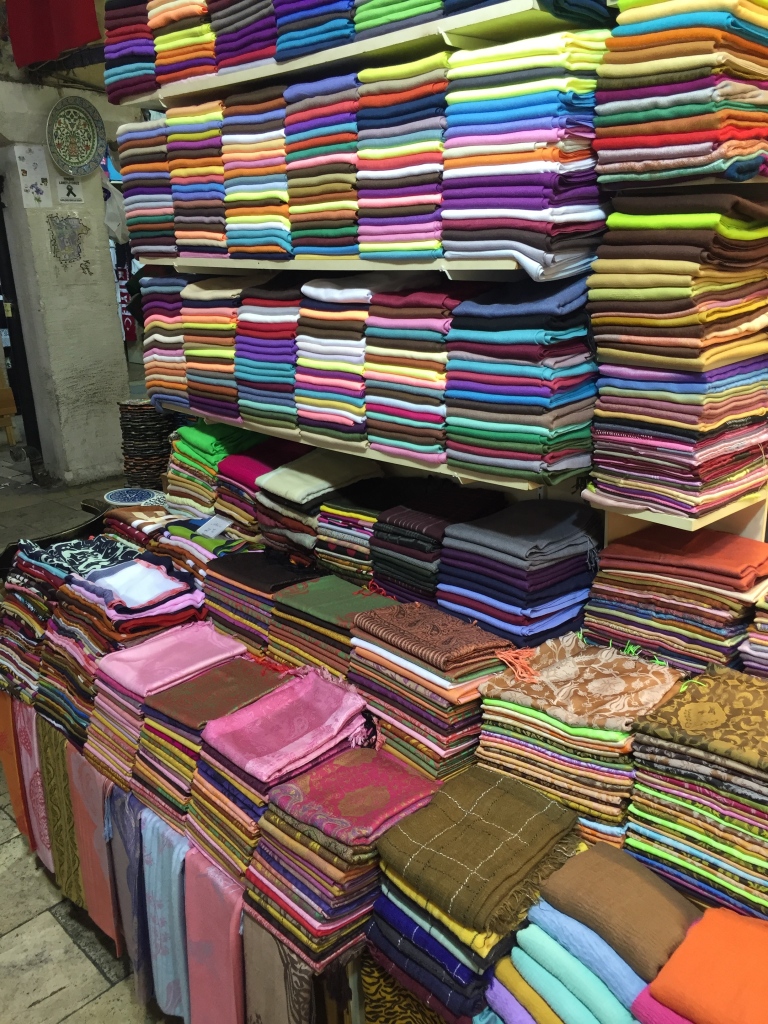 I still regret not buying that shisha pipe with the horses. Unfortunately, I did not want to deal with carrying it around or trying to ship it. 😦

Oh yea, gold was not in shortage at all. There were aisles that seemed to go on forever lined with all types of gold jewelry. 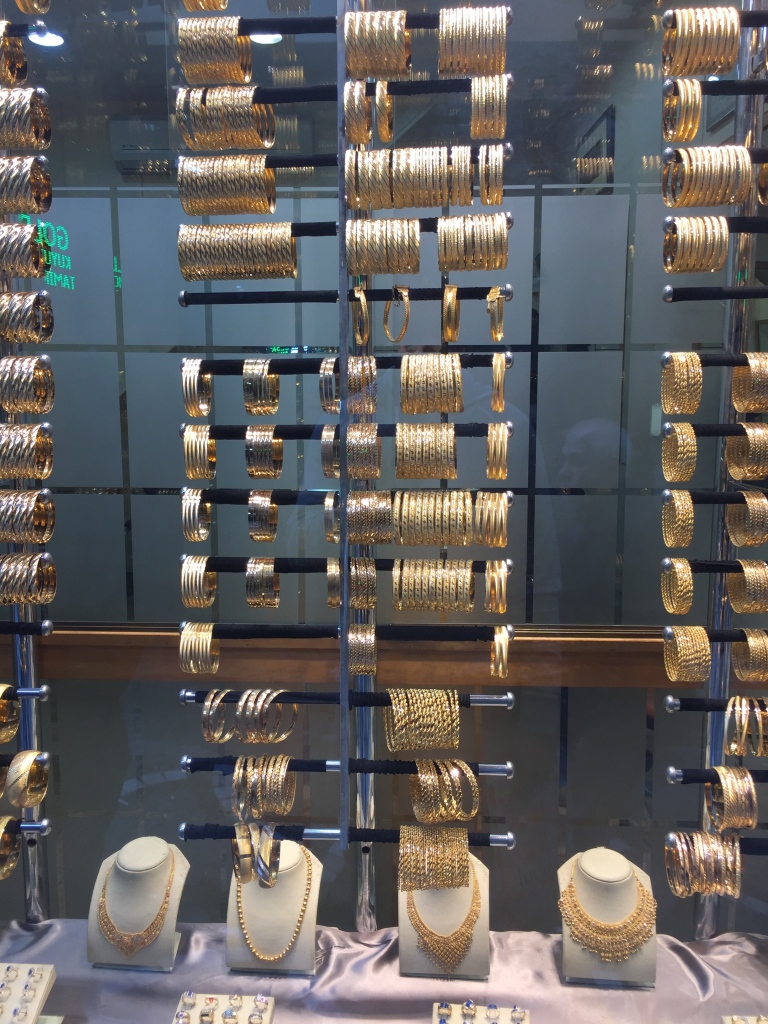 One of many interesting things about Istanbul is that its the only Capital city located on two continents. Off to the left is the Europe. Across the water in the distance almost center is Asia. How cool is that?!

My friend sizing up the situation about to take place 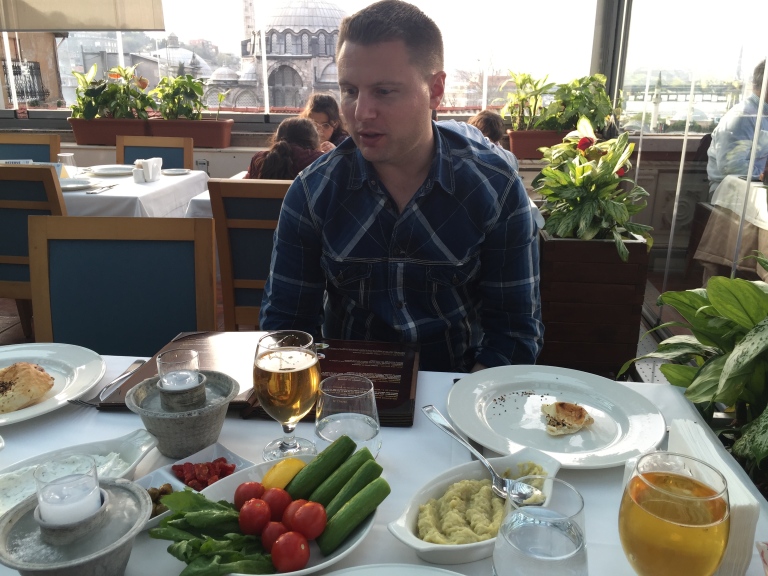 Saying this was the best meat I have ever had would be an understatement. Something about the blends of meats and spices, rolled together, grilled, and then dressed up on a plate was nothing short of amazing. Everything I put in my mouth these few days put me in a state of pure euphoria and I did not want to leave.

This, my friends is called Raki. It starts off as a clear liquid. It is served in these glasses over ice and water is added. A few seconds later, the mixture of water and this liquid turns cloudy like milk. I still have no idea how this happens but it was pretty good. We polished off two bottles just at dinner alone. It has a vague licorice taste, similar to Sambuca but not quite as strong in flavor.

The next night we went to one of the top restaurants in the area. Below are some profiteroles I had for desert.

I found this picture to be very interesting. In a city where I saw extremely few (barely any) black people, inside of this restaurant this gorgeous picture of a young black girl is prominently placed on display. All of a sudden, I felt very welcome. 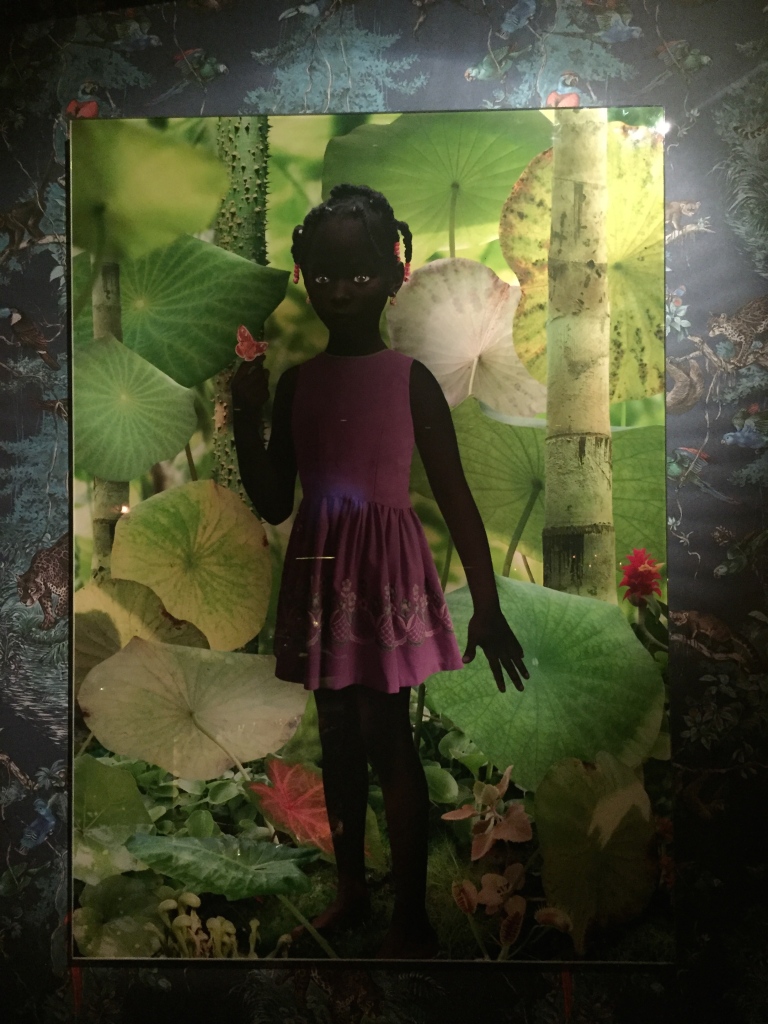 One of many mosques.

Outside of Sultan Ahmed Mosque, better known as the Blue Mosque

As a westerner, we really do not get to see these types of cultural differences. I had to take a picture. 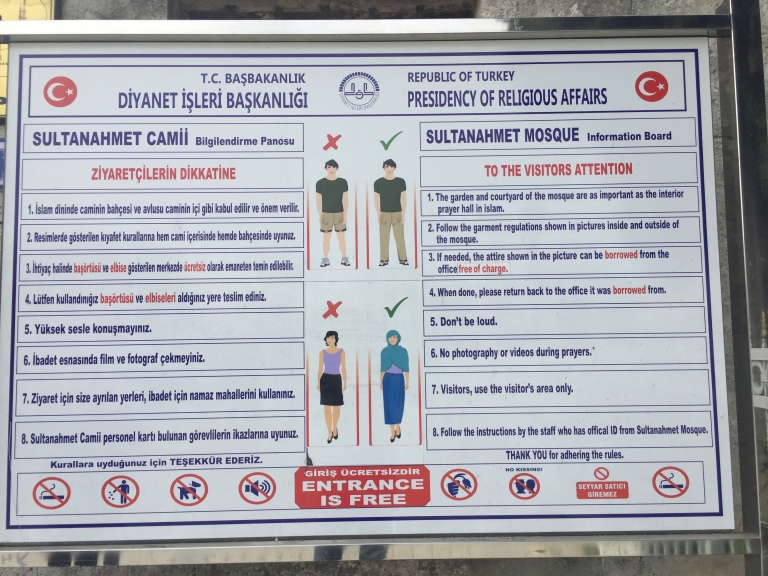 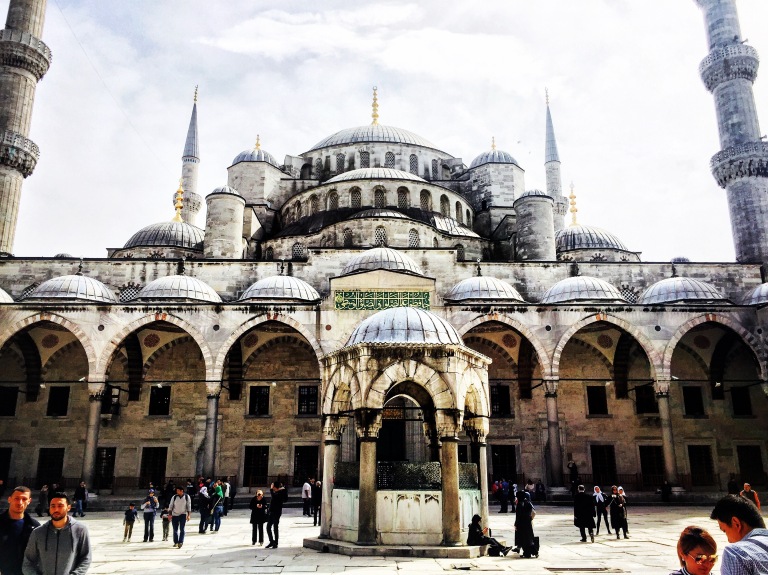 Right before I head to the airport I enjoyed a cup of turkish coffee. Word to the wise, DO NOT drink it all the way to the bottom. They do not use a filter which is why the coffee is so strong. More importantly, the coffee grounds are all at the bottom of the cup so you will end up with a mouthful of unwanted mess.

All in all, Istanbul was truly one of the most interesting cities I have ever visited. I wish that I could have stayed longer unfortunately time did not permit. I sure hope they put a lid on some of the political turmoil going on there because it is a place I would recommend highly if safety were not an issue.

I will certainly be back, regardless.