Hiking to Trolltunga has been a huge desire of mine since I knew of its existence and finally I can say that that dream has been achieved!!!! Two years ago when I moved to Sweden I had come across pictures of this place and I promised myself I would make it happen while I was here. For those that don’t know, Trolltunga meaning “Troll’s Tongue” is a rock that extends from the side of a cliff in Tyssedal, Norway. The hike takes about 8 hours to complete, there and back, and covers 22km of varying elevations, temperatures, landscapes, and climate changes.

I had been planning this hike for several months so each event was carefully calculated. The pictures below are in chronological order so please enjoy. Without further ado, lets begin!

The trip began in Bergen, Norway, a city on the west coast right on the water, particularly interesting because I am from a city on the water, thus my natural extreme taste for seafood and hence the below picture. This is a king crab that was caught earlier that day and soon after ended up on my plate. 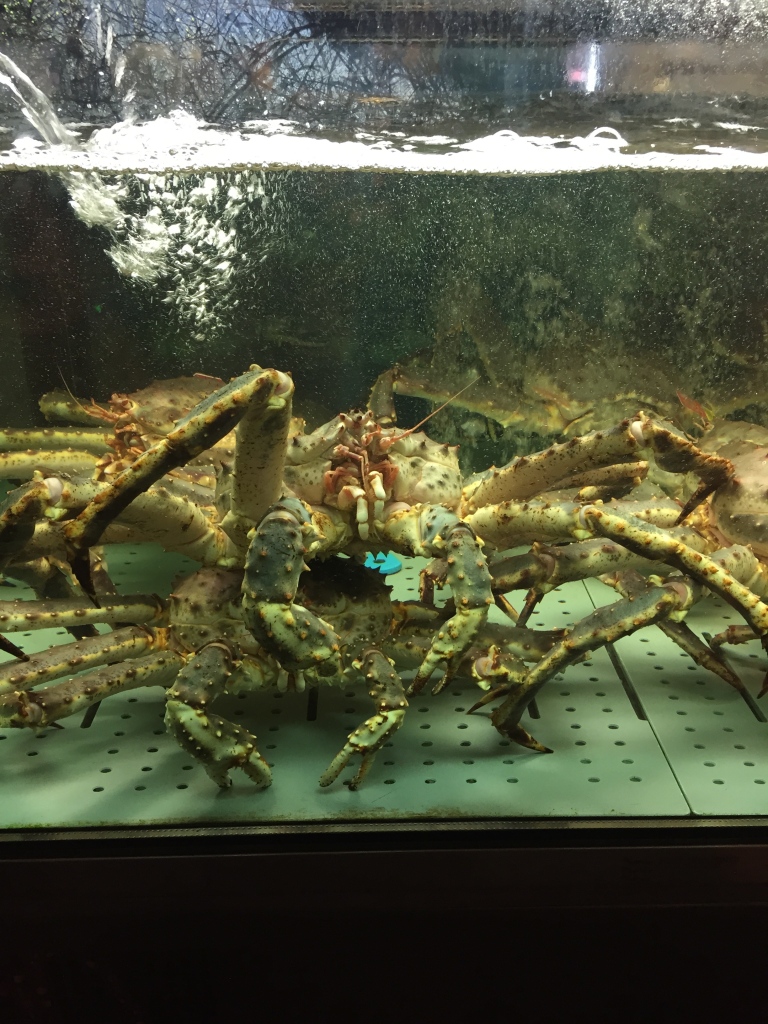 Hansa, a local beer. Unfortunately it was extremely low alcohol content because they are not allowed to sell real beer on the street in Bergen. 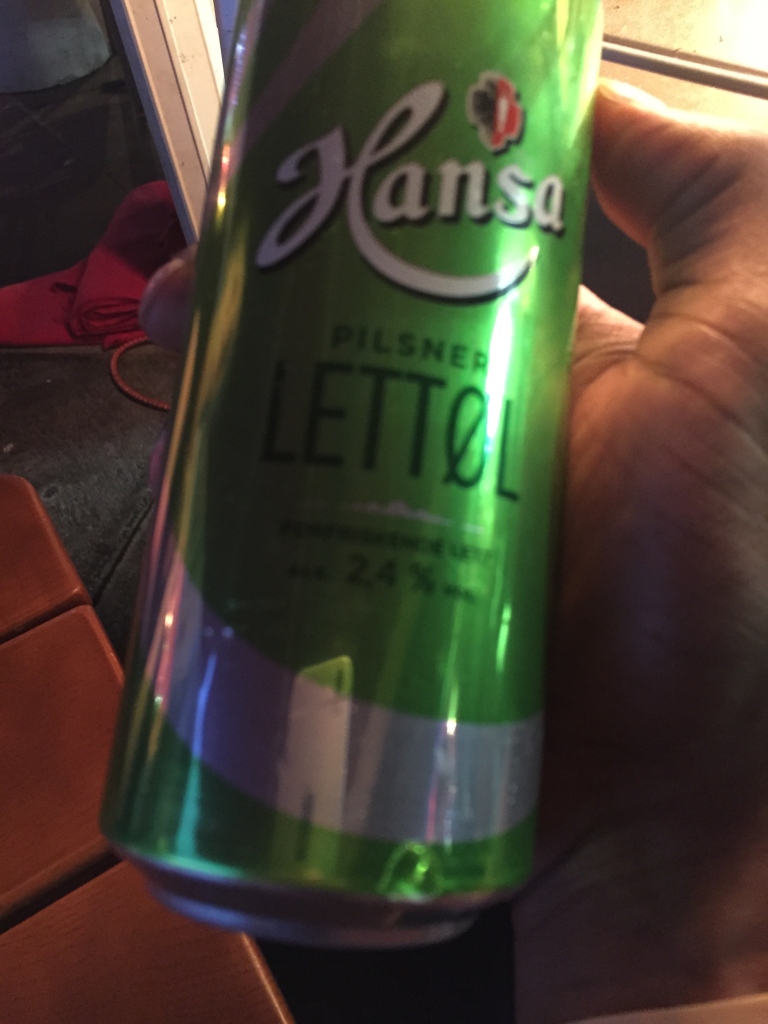 Bergen by night… At the top is a funicular train.

The following day my friend and I decided to explore the city a bit (this city is extremely tiny so it literally took us less than a day lol) and below is a picture of me in the fish market from the night before. 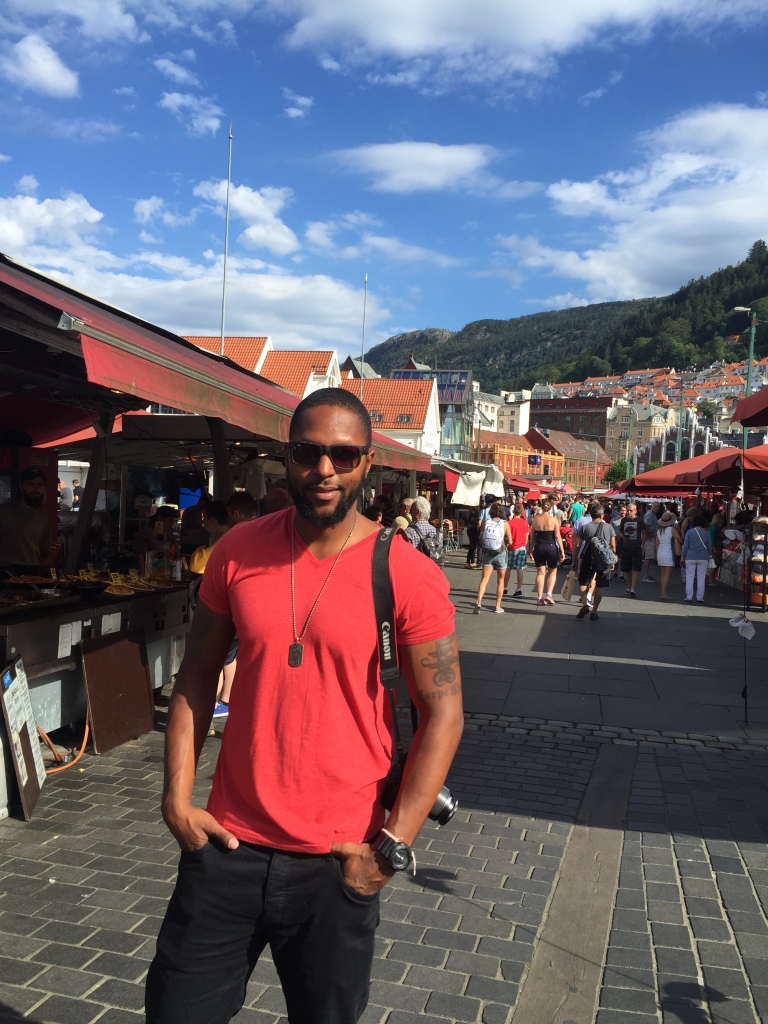 This is how the crab above looked on my plate 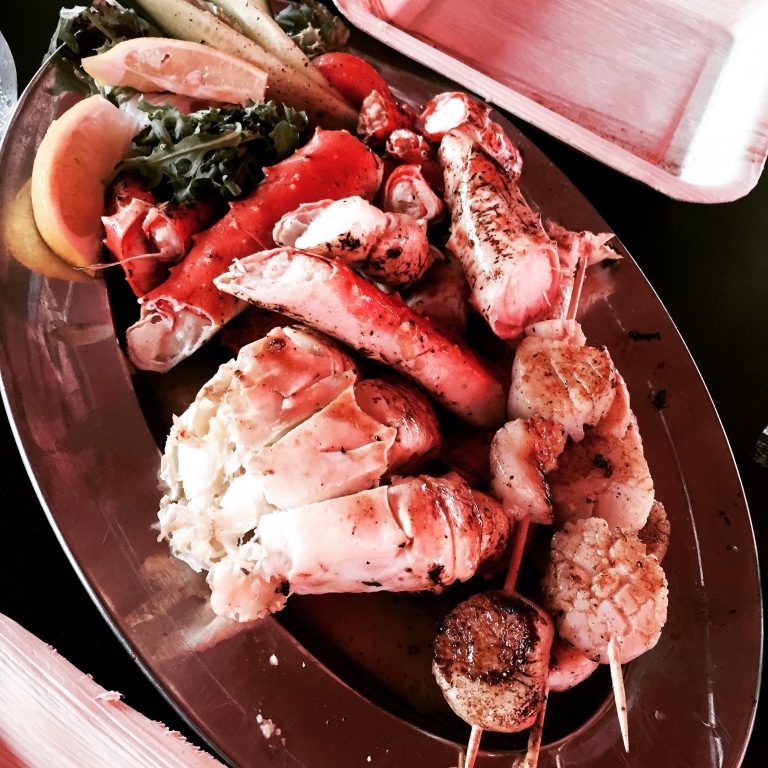 Headed to Tyssedel to begin the hike the next day. 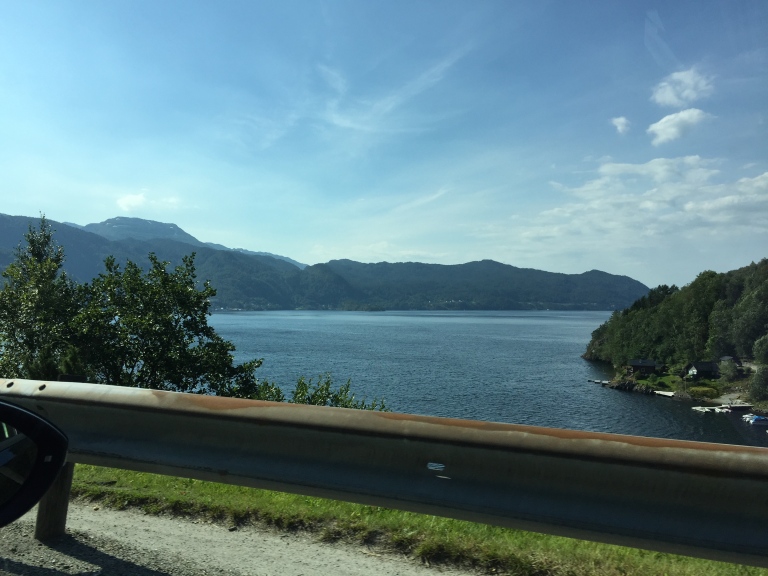 Found this waterfall along the way

And this cool “bus stop”. Yes, thats what bus stops look like in this part of the world. 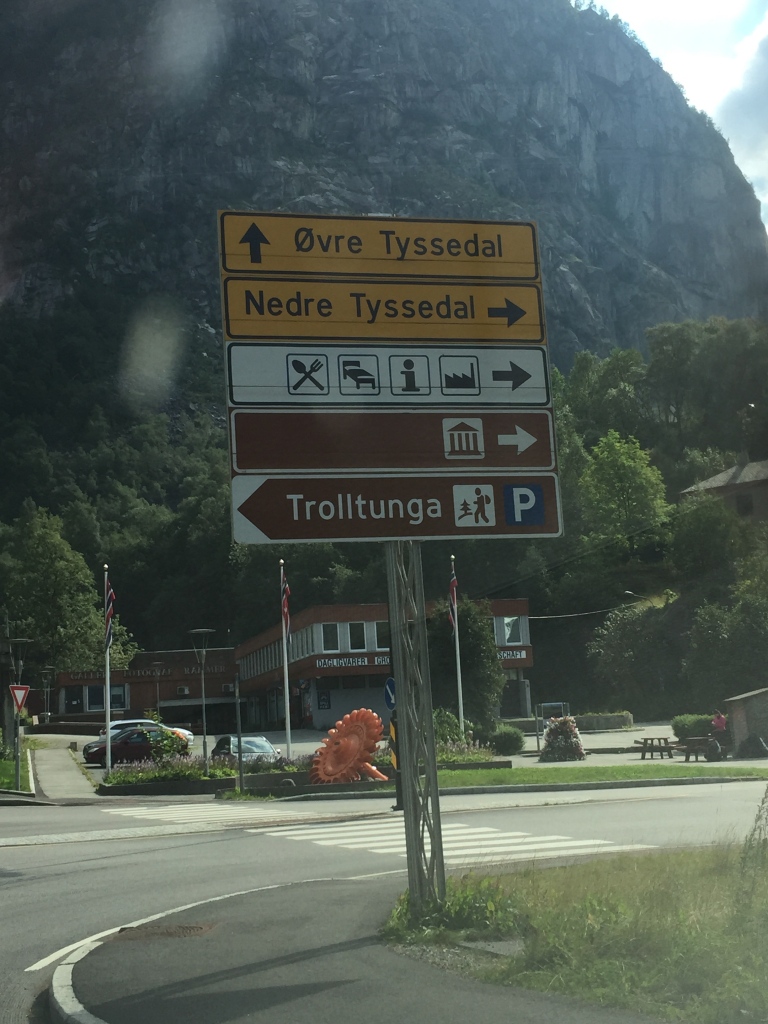 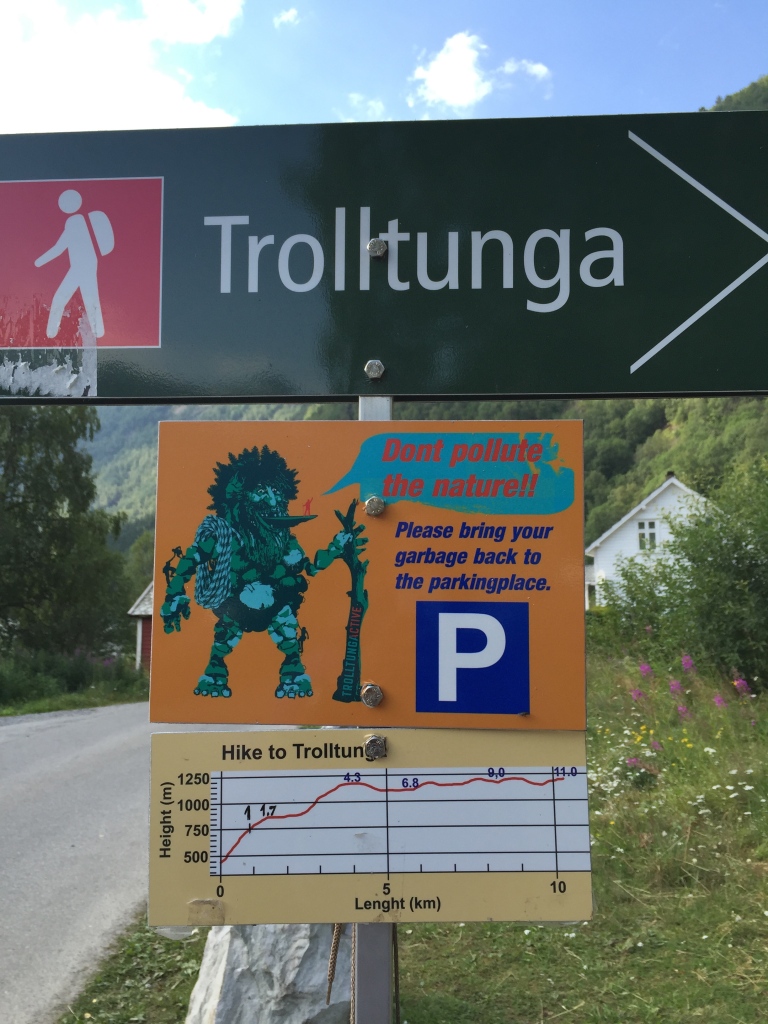 1km in and I am already drenched with sweat, though the picture does not show it. 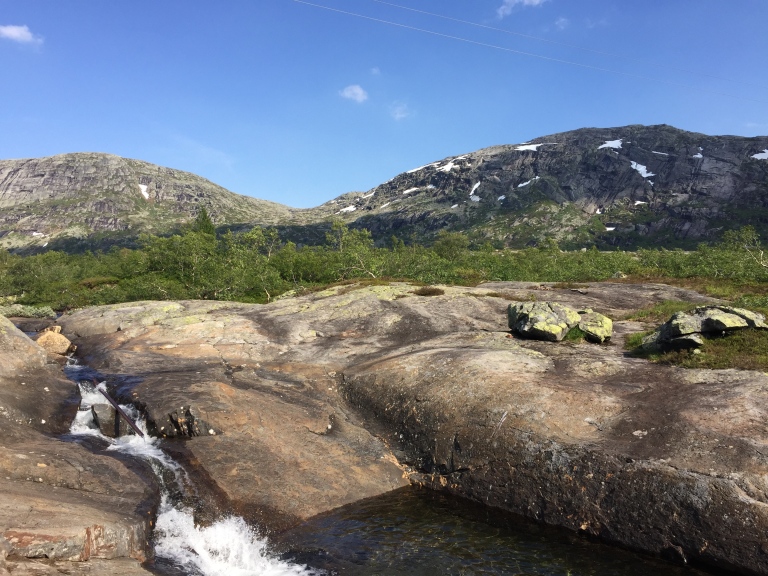 4km in and I am definitely feeling it! This hike is tough!!! 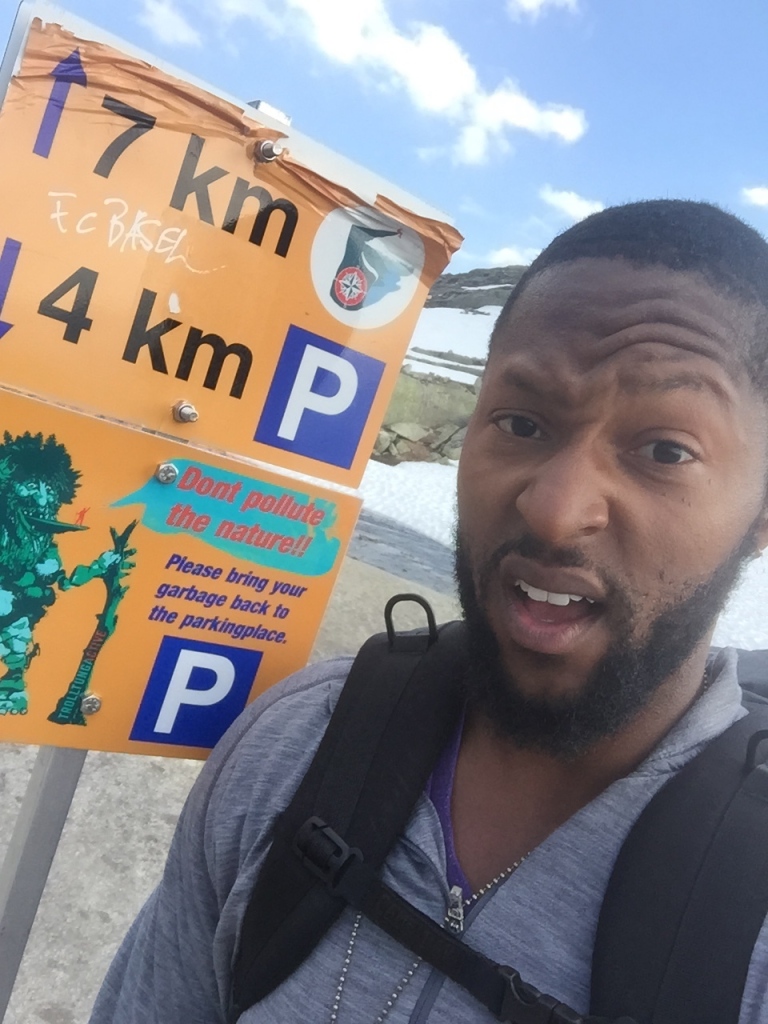 At this point we have encountered the first drastic climate change. Up to this point we were wearing t shirts and it was very warm outside. I had already switched to my first extra layer of clothes but my friend here was being stubborn. I told her she looked silly hiking across the snow with shorts on and she knew she was cold, but, because she is a Swede she wouldn’t let it show. Five minutes after the picture was taken she wised up and decided to put on some pants. 🙂 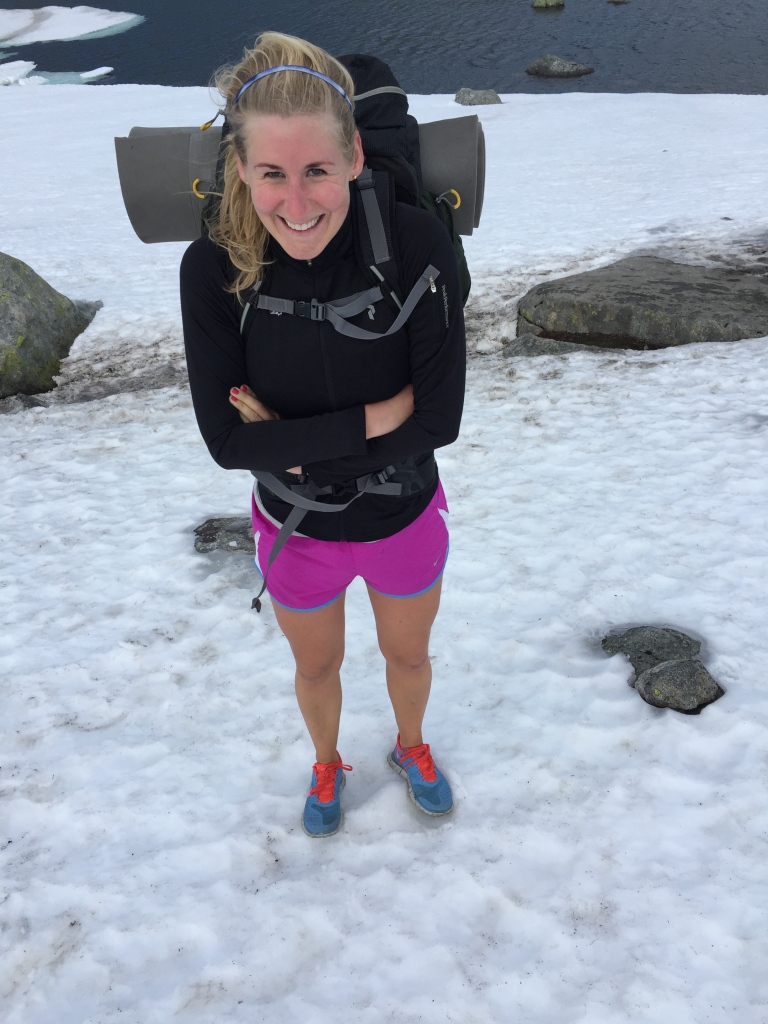 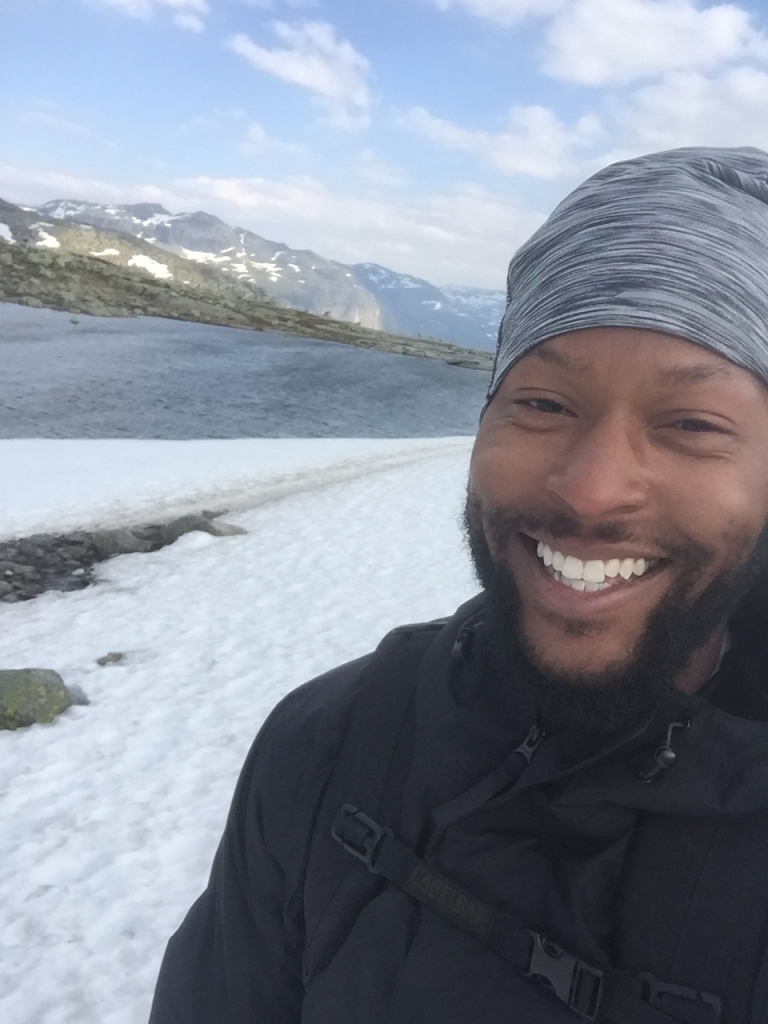 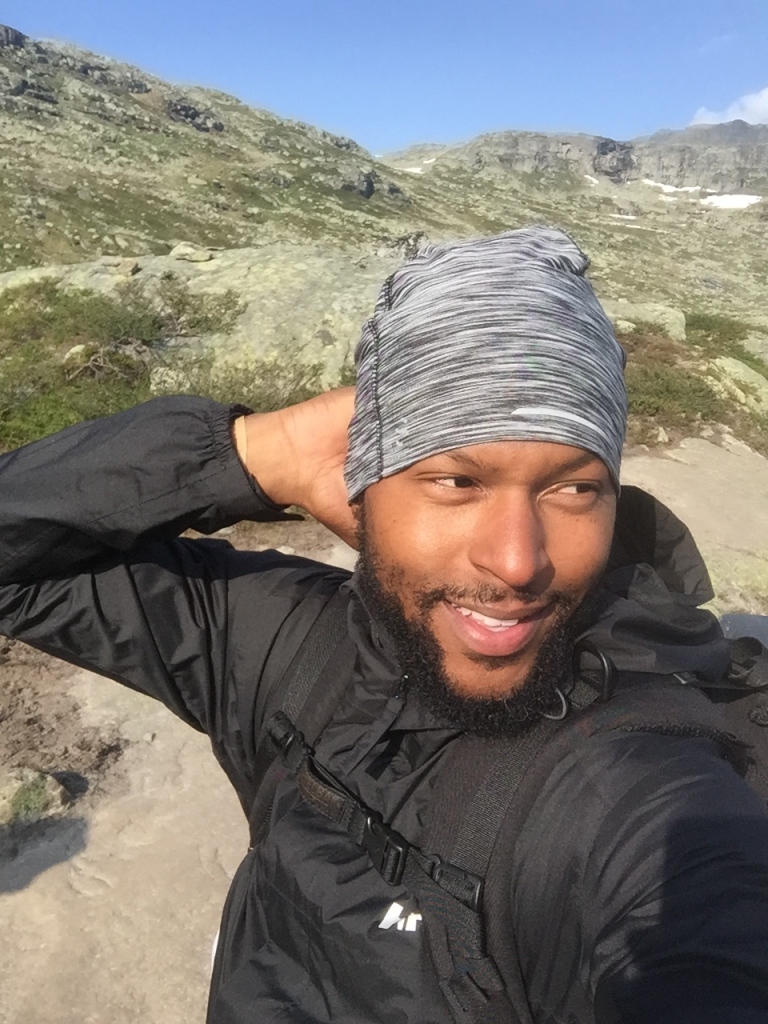 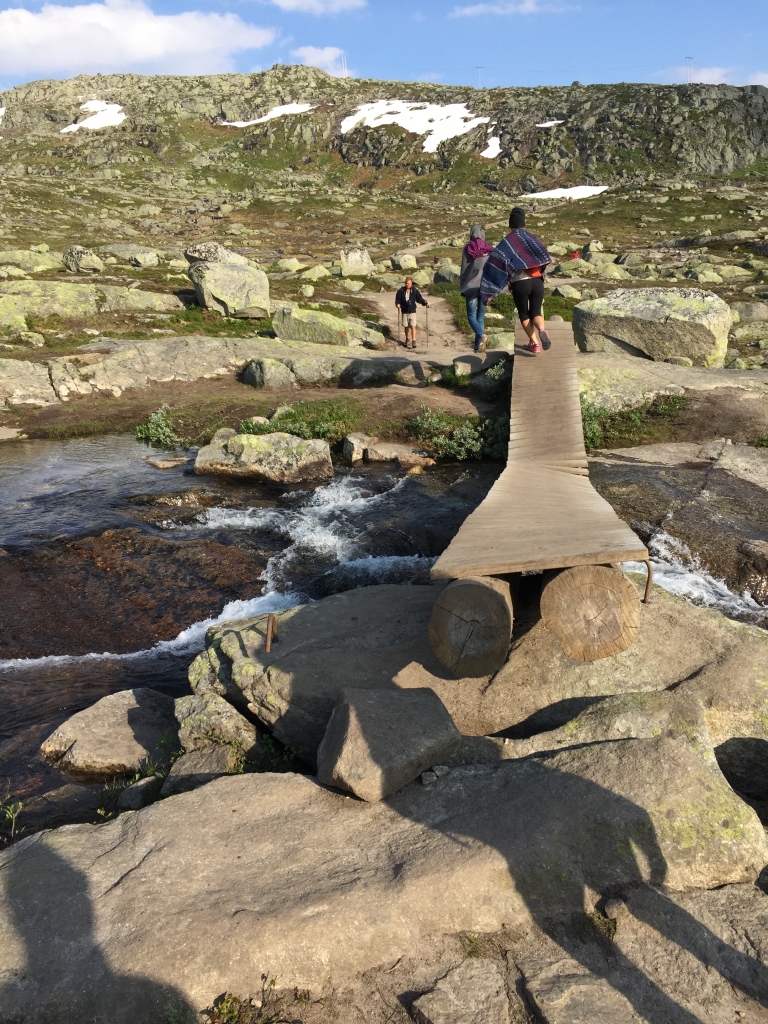 Take a moment to glare at that magnificent view 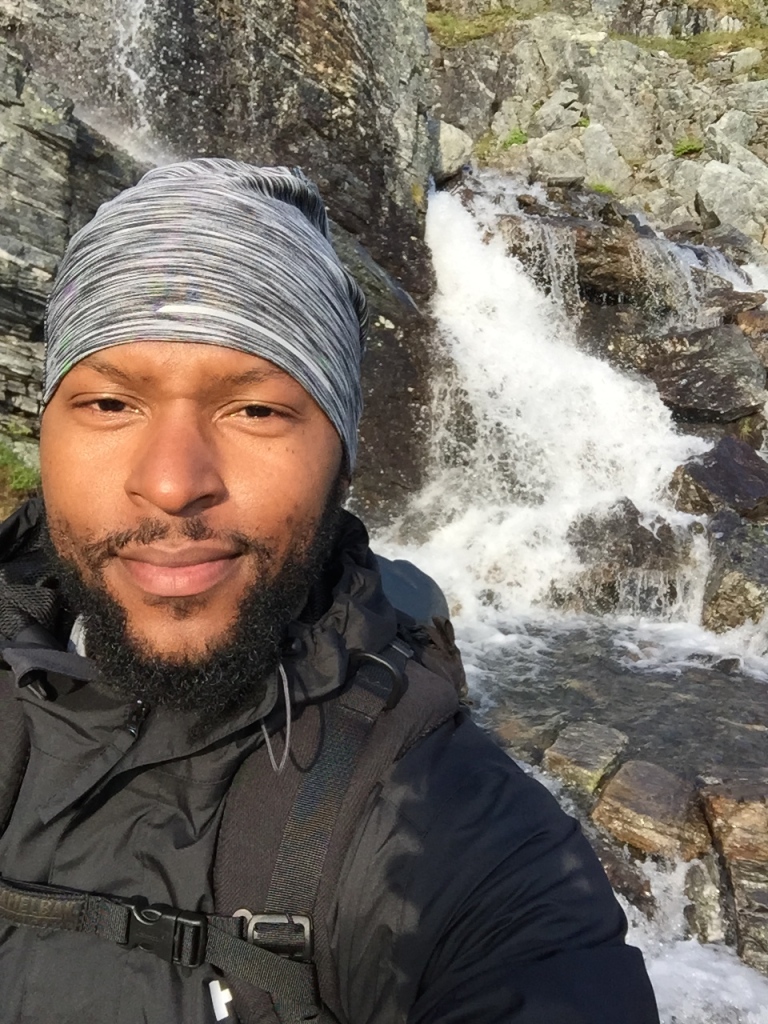 I tried my best to capture as much as I could but the pictures really don’t even do it justice for how breathtaking it was being here. 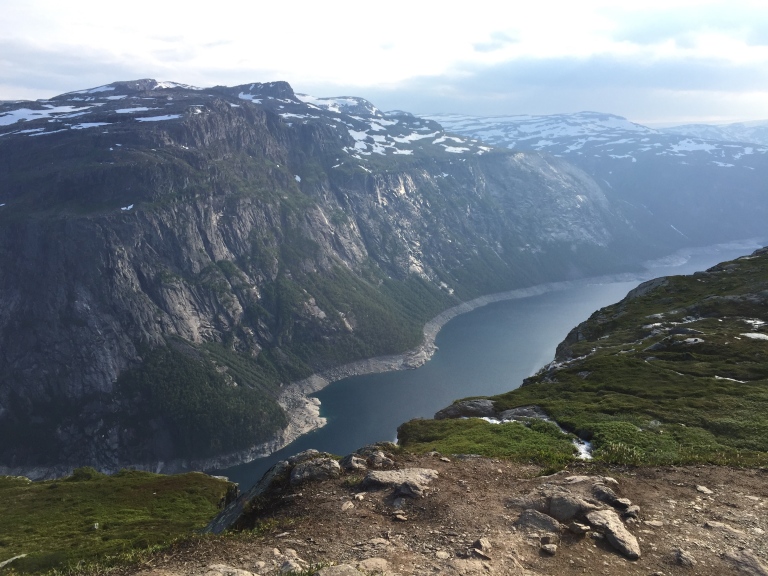 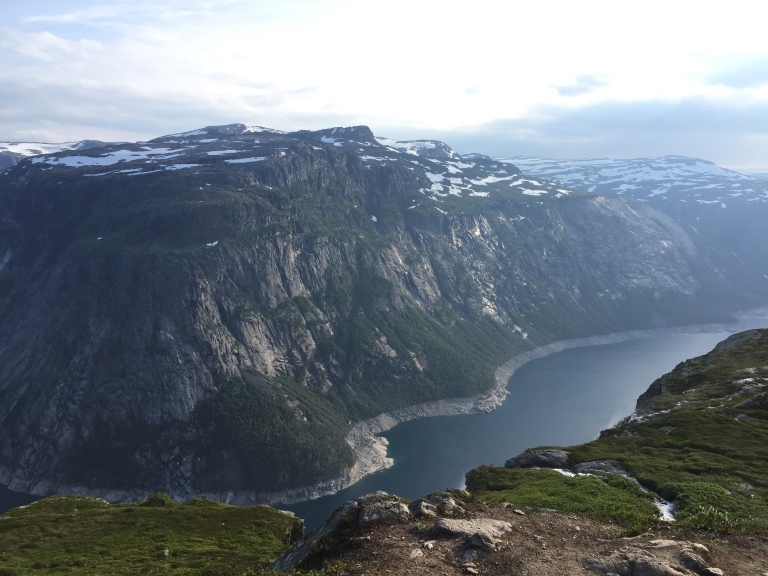 Finally after 11 long kilometers we reached the “Troll’s Tongue”. It was every bit as impressive as I had dreamed but after a very close call earlier in the day, my nerves were bad. Clearly, hers weren’t.

This was the last picture I took before I approached the edge. My heart was pounding and my knees felt weak. I have never thought that I had a fear of heights, however, the idea of having absolutely no safety ropes was freaking me out. I did not come this far not to walk to the edge. And I told myself that I would even hang my feet off the edge.

Here is a picture with my feet off the edge. I sat here long enough to have a few photos snapped as proof and then I crawled on my knees back to safety. Call me what you want, but at least I did it!

I had planned to stay the night at the top of the mountain, apparently about 7 other groups had the same idea. This tent actually held up pretty well in the conditions. The wind was so strong at the top that several times through the night the roof of the tent was pressed against my back. Luckily as soon as the wind stopped, it popped back up into place.

Tearing into her first ever M.R.E. 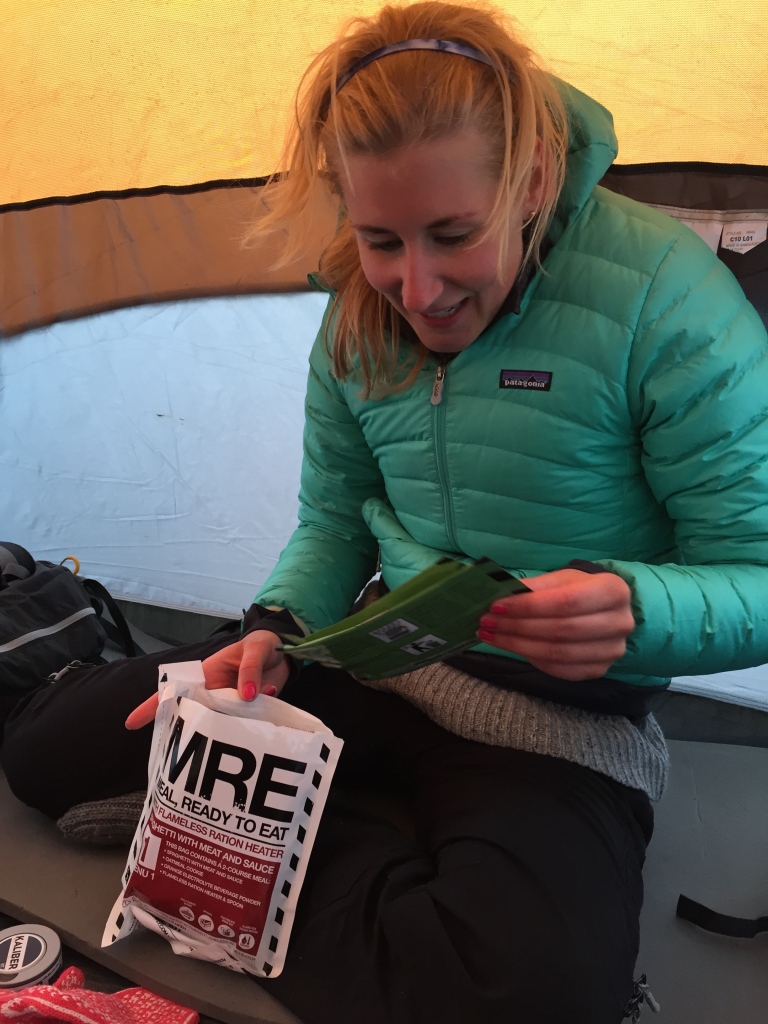 The next morning we took a few more pictures and made our way back down. 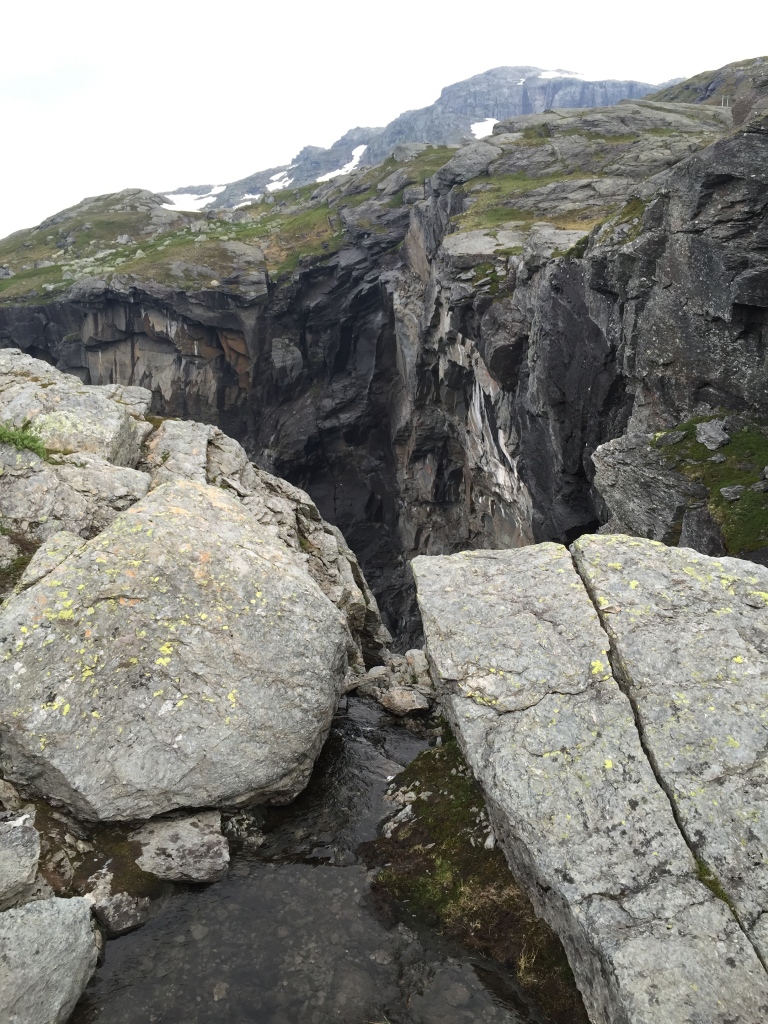 Saw this huge cavern and thought it was a great place for a photo op. The bottom was easily at least 30-40 meters down but thats as close to the edge as I would get.

This rock was the point at which we made a crucial wrong turn. On the way up, we did not see it because we were looking up, but on the way down we saw where we made our mistake. 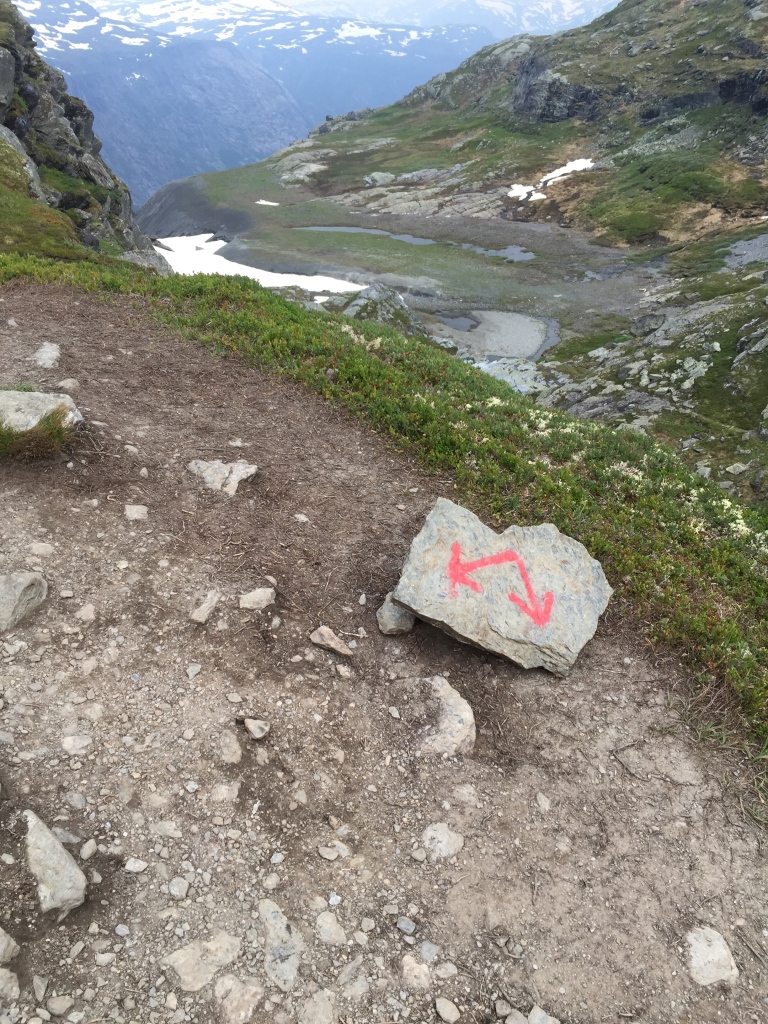 The last kilometer was pretty tough getting down because it was basically a 60 degree incline. My knees and toes were killing me! 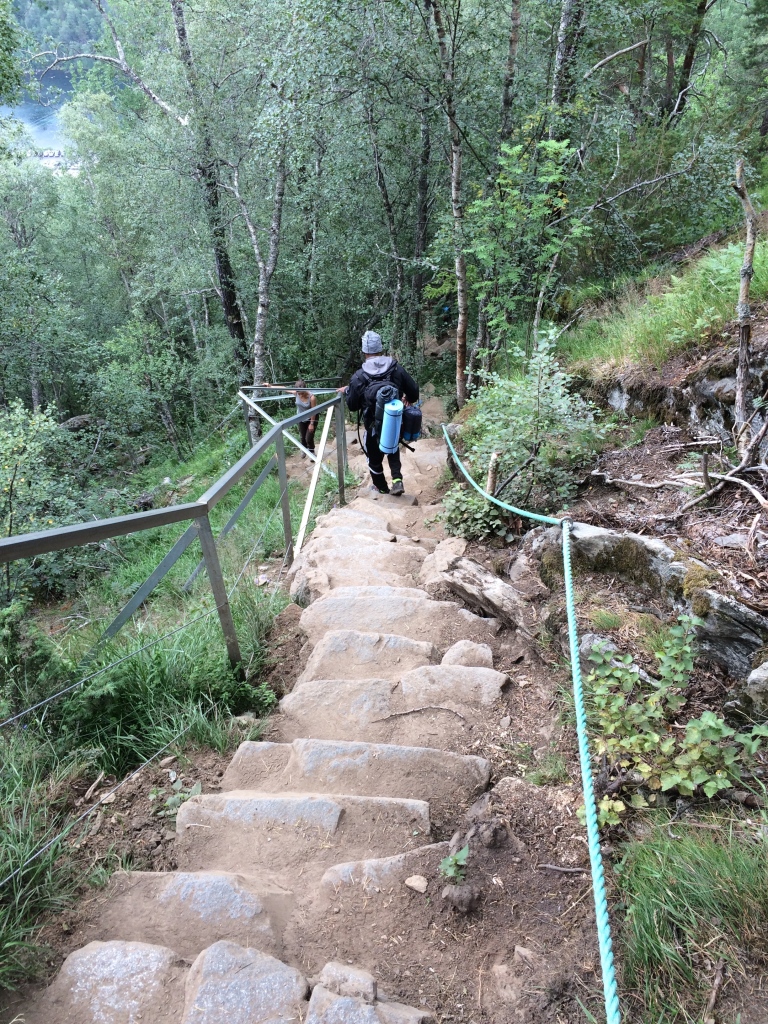 She stopped to take a breather. By the way, I forgot to mention how incredibly tough it is to get past the first 1.7km of this hike. Its ALL uphill and not easy to negotiate.

Back down at the bottom to where we started. 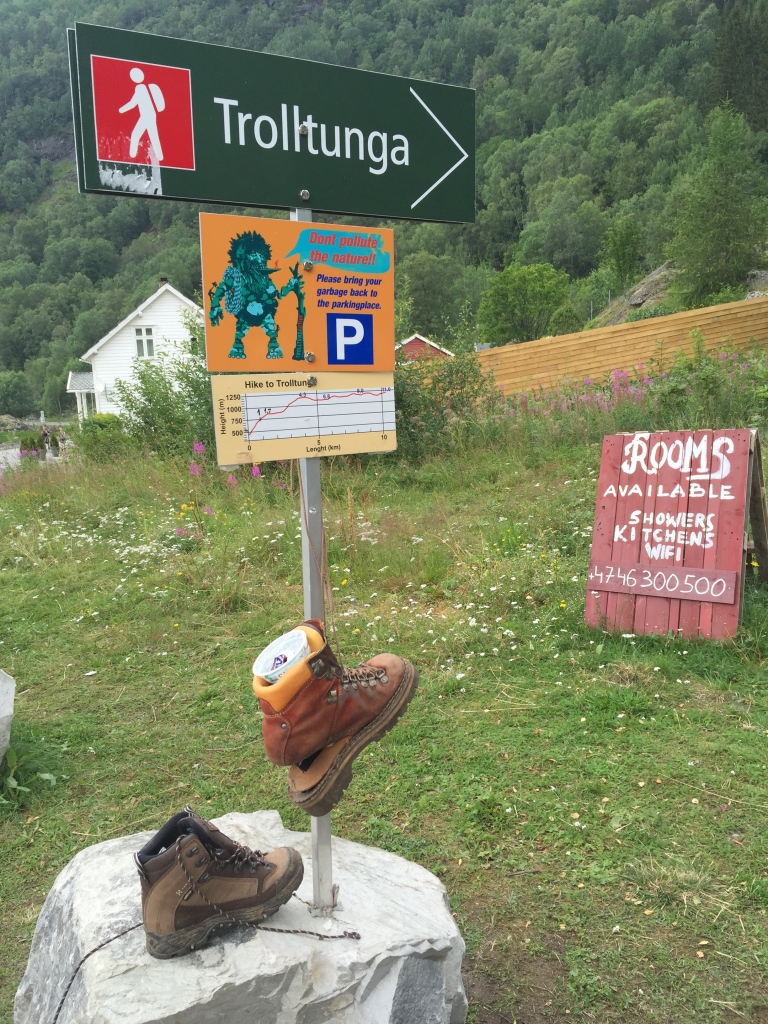 To end the day we made a 3 hour drive back to Bergen and walked around the city. Our reward was soft serve ice cream. Job well done! 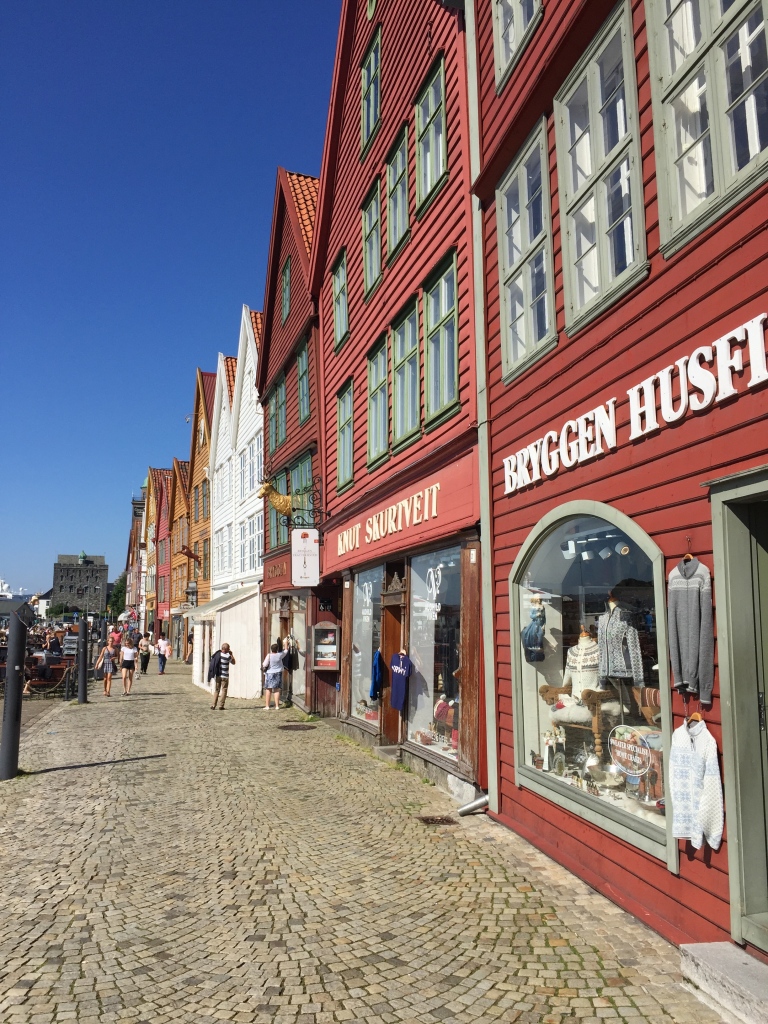 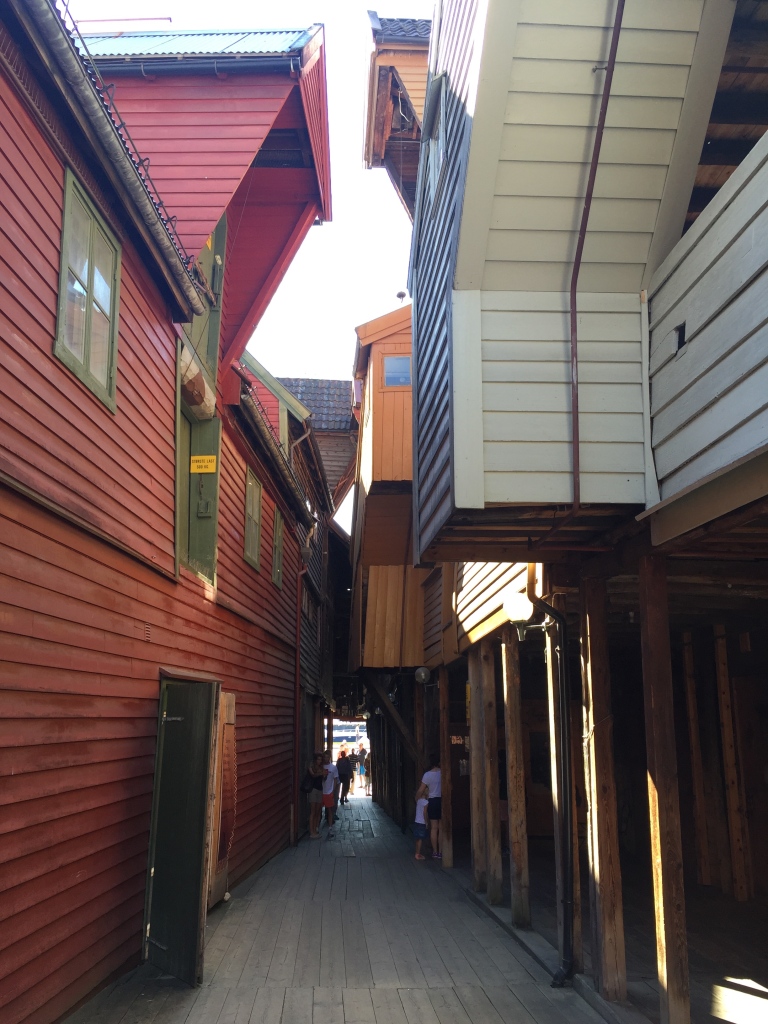